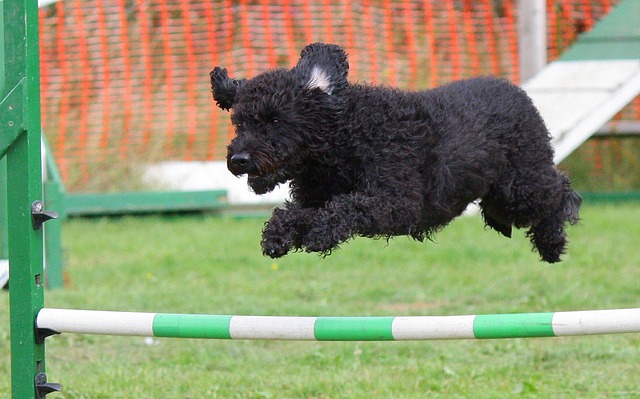 Watching an agility trial on television, you might assume that the only breeds successful in agility are herding dogs and terriers. But if you wait a while, you’ll also see the occasional “non-traditional” agility dog, such as a Shiba Inu, Great Dane or Beagle.

A scenthound’s genetics compel it to follow its nose before it even knows its name. How do you get a Beagle’s nose off the ground long enough to notice there’s an agility jump in front of it?

To find out why someone would choose such a daunting training challenge, I talked with Lisa Jones. Lisa and her husband, Gary, own two Beagles that hold many titles, and are well respected in the Southern California agility scene.

Q: As cat people, how did you and your husband end up competing in canine agility?
A: We both had cats and family dogs growing up, but apartment and condo living seemed to lend itself to cats. After seeing our friends run their Australian Shepherds in agility, we said, “We gotta get a dog!”

Q: Why did you and your husband choose Beagles?
A: Living in a second-level condo, we knew we needed a smaller breed that would get along with our cats. We considered the Corgi, but we had concerns about its long back. Little did we know that a Beagle’s nose would be such an issue!

Q: How did you find your dogs, Abby and Major?
A: We met a breeder named Janet Doesschate. After a long and informative conversation, Janet said she had a puppy available. We entered into a co-ownership agreement.
Our other Beagle, Abby, was Major’s first birthday present. Major would howl out of loneliness while we were at work. We went back to Janet and bought 11/2-year-old Abby.

Q: When did you start agility training with Abby and Major?
A: We started agility puppy classes with Major when he was 9 months old. After we got Abby, she joined him about two months later.

Q: How did you decide which dog each of you would train and compete with?
A: Training and running assignments have fluctuated over the years. Initially, the agility bug bit me harder. I started training with Major and he quickly earned his Novice [beginning level] titles. Once we entered the Open [intermediate] level, Major began demonstrating an adolescent attitude. Around the same time, Abby developed severe confidence issues. Gary and I were both frustrated, so we decided to trade dogs. After a lot of time and cheerleading, Abby eventually caught up to Major at the Excellent [advanced] level. We traded dogs again in 2003, and I’ve been running Major ever since.

Q: What challenges did you encounter while training your Beagles?
A: Unlike a herding breed, pleasing one’s owner is not a high priority for a Beagle. Sniffing and eating, however, are. Sniffing is probably the most difficult obstacle to overcome because Beagles were bred to track rabbits. If we had a dollar for every refusal [when the handler directs the dog to an obstacle and the dog pauses or looks away] earned because Major or Abby wandered off to sniff, we’d be rich!

Q: What did you do to rise to the training challenges?
A: After a lot of trial and error, we used their desire to eat to our advantage. We offered a lot of high-value treats as rewards. They learned that if they played the game, they earned a big pay off. If they wandered off to sniff, they’d be picked up and returned to their pen without a word or treat. By adding some “sniff time” on a retractable leash before and after runs, their desire to sniff in the ring has been greatly reduced.

Q: Do you recall any particularly high points in their agility careers?
A: For Major, the entire year of 2007 has been his high point. He earned his MACH [Master Agility Champion] title just weeks shy of his ninth birthday, placed second in the United States Dog Agility Association Veteran’s Showcase, competed at the American Kennel Club Invitational, and earned his MACH2 in December. For Abby, it was when she earned her MX [Master Agility Excellent] and MXJ [Master Excellent Jumpers With Weaves] titles.

Q: Can you share a memorable time that only a Beagle owner might truly appreciate?
A: There was a trial at a park where Abby and another Beagle wandered off to sniff during a run. Luckily, they did not incur a refusal; they just lost some time. When it was Major’s turn, he went to the same area, sniffed a little harder and found a rib bone! Needless to say, he started chewing it. Not wanting to get disqualified for touching my dog, I yelled to the judge, “He’s got a bone!” She said, “Well, take it away from him and we’ll let you run again.” After a few dogs, we ran again, and sure enough, he went back to check out that area. I called out, “All gone, no more!” and he looked at me as if to say, “Oh, OK,” and we finished the run and got the Q [qualifying score or run].

Q: What’s on the horizon for the four of you?
A: For Major, we’re working on earning his MACH3 before the end of the year, and qualifying for the AKC Invitational again. For Abby, we’re just making sure she’s having fun and seeing how many MJP [Master Excellent Jumpers With Weaves] titles she can get.

Q: With Abby and Major achieving senior status, do you have plans for your next agility dogs?
A: We hope to get two puppies this summer. A half-sister to Abby had a litter in April, but there were only two male puppies. The breeder hasn’t decided yet what her plans are for the boys.

Q: Will you train new puppies any differently than before?
A: We’ll teach target training, but not on the ground! We will also put more emphasis on groundwork training (front and rear crosses, directionals, and so on), and we will give them more time in training before taking them into competition.

Q: What characteristics of Beagles make you want to continue training them?
A: We like the Beagle’s big-dog personality in a small package and its eternal puppy look. We also like the sense of satisfaction and accomplishment for succeeding with a breed thought to be difficult. We really appreciate the compliments we get from the people in our agility community – they know how much extra time and effort it has taken to get to this point. We hope to prove with our new recruits that Abby and Major are not just flukes. Like our license-plate frame says, “Agility beagles – not an oxymoron!” 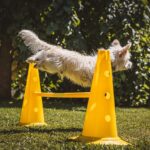 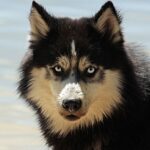